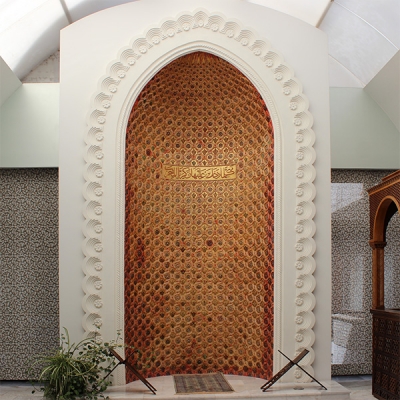 In 1795 in Zagreb a book on „Fragments of the life-history of messanger Muhammed in relation to his religious-politics and moral principles“ written by Franc Dombay has been printed out.

It was the first book about Islam and Muslims after the retreat of the Turks from Croatia.

1883 On the Zagrebs’ cemetery Mirogoj, the first Muslim was buried in accordance to the Islamic rules.

1892 By the decree of Croatian-Slavonian Provincial Government entry to the Faculty of Law of the University of Zagreb has been enabled for all Muslims studying in the Sarajevo Shariah Judge School. October 24th, 1892 the name of Osman Nuri Hadžić, the first Muslim from Bosnia and Herzegovina that has been registered in the historical records of the University of Zagreb, the study of Law.

1908 In Zagreb the first pastry shop of the oriental kind has been opened in Ilica street, owned by an albanian from Macedonia.

1910 In the Population census there have been found records of Muslims living in Zagreb at that time.

December 27th, 1916 in the School house on the Katarina square in Zagreb the first lectures on Islamic Teachings have started.

1919 -1945 During this period Ismet ef. Muftić (1886-1945), was the first head of the Islamic office in Zagreb and the first Zagrebs’ Mufti, thus the founder of the Islamic religious and educational life in Croatia.

1919 The Islamic office has been founded in Zagreb authorized for the teritory of Croatia.

1933 In Zagreb starts with the work „Narodna uzdanica“ - the first Muslim cultural society in Croatia.

November 29th, 1935 first Majlis was opened in Tomašićeva Str. 12 as the first premanent room for praying.

In 1935 Sharia court was established in Zagreb and it was base for solving and regulating Muslim’s family and marital issues. Dr. Ćamil Kamarić was the first Sharia judge in Zagreb and his seat was at District court at Zrinjevac.

1943 - 1948 The first Mosque in Zagreb was built, and for six years in Islamic function

1957 The Constitution of the Islamic Comunity in Yugoslavia was elected

1961 The Islamic Speakers platform was established. It is still functioning, and was named after late dr. Sulejman Mašović, its first and longtime lecturer.

1970 The Board of the Islamic Community in Zagreb, wrote the proposal letter to the prof. Juraj Naihardt and dr. Džemal Čelić, elaborating its Project Proposition of the Mosque in Zagreb.

1975 - 1988 - 2012 Ševko ef. Omerbašić was appointed as the Imam for Zagreb, and after that for 24 years the Mufti of Croatia. A historic figure who created and leaded successfuly the Muslim Community in the period of almost forty years, as the most important member and leader. He is respected in the whole Croatian society. Decorated by the President of Croatia for his life work.

1987 The Zagreb Mosque - Islamic Center starts with its work.

2012 Dr.sc. Aziz ef. Hasanović elected as Mufti of Croatia. One of the many efforts of the Mufti is to propose the successfull model of Croatia regarding the relations between the state and the Islamic Community to non-Muslim and Muslim countries.